Today is my father’s 82nd birthday. In honor of this great man, a re-posting of MVP from 2010. Happy birthday, dad. –

Yesterday was my father’s birthday. He turned 78. There is so much I can say about my dad, he has been the true constant in my life. Yes, he instilled my love of sports, but more than that, he taught me to work hard, appreciate the results, be kind to everyone, place God and family first. And all by example. He is the quiet, gentle lead-by-example hero in my life. I consider myself more than lucky, more than blessed.

This is one of my favorite pictures of my father: 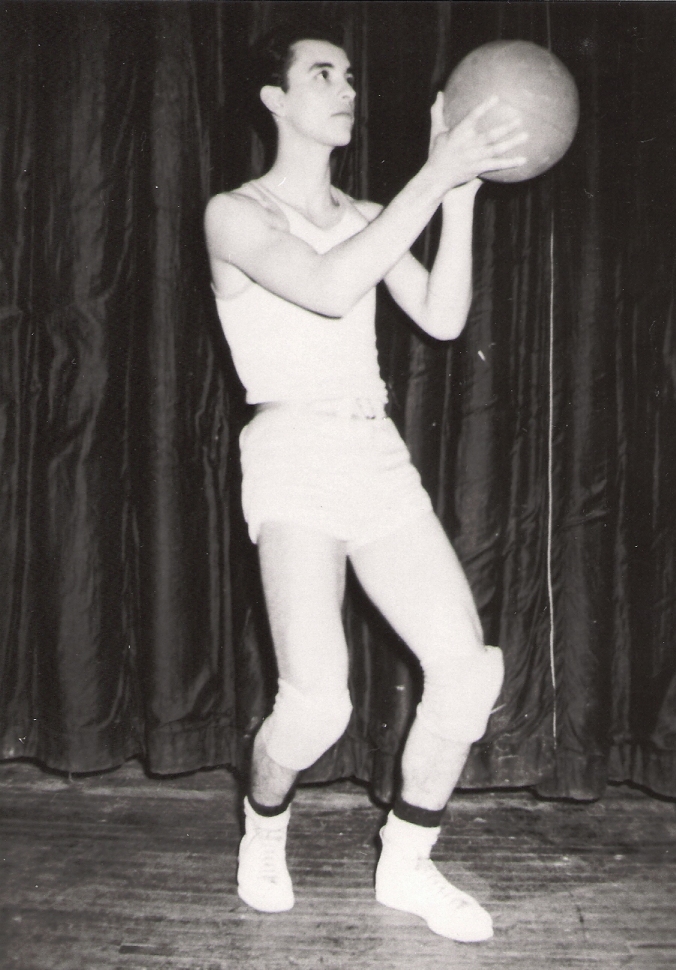 This is from his 1954-55 season with one of the city league teams. I’m not sure if it’s the church league, Our Lady of Perpetual Help, or the Naismith league with the VFW. But I love this picture. My dad was a player. He has a mustard-colored scrapbook filled with black and whites like this one, newspaper clippings, self-written or typed notecards with the team stats. He also has a shelf in the basement filled with trophies. They used to sit on the television console, then were moved to a long table in the living room. I used to glide my fingers across the shiny miniature basketball players, trace the engravings of his name, his team. There was even an ivory and gold trophy I swore was bigger than me, three-tiered and decorated with golden wreaths. I loved these trophies. They were a part of my father. A piece of him I only knew of. Never witnessed. Because by the time I was old enough to walk, he had retired from the game, except for the occasional pick-up game.

While many wouldn’t consider my father’s basketball career a success, in my eyes and the eyes of my siblings, there was no other player more successful than my father. And while I never got to see him play, I knew this by the stories my mother and older sister shared. The stories his friends shared. Their eyes would light up when they talked about my dad on the court. “Your dad could play…best hook shot I ever saw…greatest assist man…so smooth, he was down the court before you realized it…unselfish…cool.”

The first time I met local football icon, Linwood Sexton, a huge grin spread across his face as he commenced to tell me that if my father had been given the opportunity to play high school ball and come to WU, his jersey would be hanging in those rafters at Levitt Arena (now, Koch arena). “Your dad was the best basketball player I’d ever seen.” And he would know. As coach of the basketball team for St. Peter Claver, Sexton coached against my dad.

I remember gazing up at those jerseys, Littleton, Stallworth, and I wondered…what if. What if my dad had been given the opportunity? But life for a poor Mexican kid from Lyons, Kansas didn’t come with too many opportunities. Especially when my grandfather was killed in a grain elevator accident when my father was only twelve, leaving he and his seven siblings to care for their mother. They moved to Wichita to be closer to family. And those who were old enough to work, found jobs. My grandmother spoke little English and her husband’s death burdened her with an unshakable depression. The children took over the family. So at twelve, my father walked two miles to what was then Crestview Country Club near the University of Wichita, where he caddied for seventy-five cents for 18 holes. His first job. And it was there he fell in love with golf. And it was in Wichita he began to play basketball. 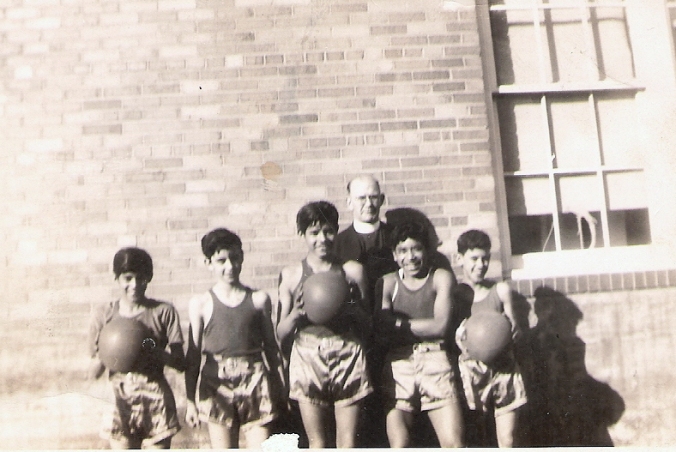 That’s him, second from the left. Not much of a team, but my dad loved playing. And he continued to play, even after he dropped out of high school to work full time he found city leagues, church leagues, and later the Mexican-American league. He just had to play.

One of the newspaper clippings from 1951, the Naismith league season, reads: “…with four minutes remaining, Oscar Castro, high-jumping VFW key man, dumped in two quick baskets to give VFW a 44-39 lead…”  My father averaged 9 points that season. Other clippings praise his coolness on the free throw line or how he made 5 of 6 shots in the waning minutes of a game. The clippings are many. The photos are fading. But the memories are alive every time someone recalls seeing my father play.

I once asked him if he wished things had been different. If he’d been able to play at North High and at WSU. Did he wish he could change his path. And he simply answered, no. No hesitation, no thought, no regrets. Just, no. And in that simple answer I truly understood my father. And this recognition brought to mind a quote, “Each one of us will one day be judged by our standard of life-not by our standard of living; by our measure of giving-not by our measure of wealth; by our simple goodness-not by our seeming greatness.”

Because my father is more than “the greatest basketball player ever seen,” more than those now dust-ridden trophies in the basement, those yellowed clippings. He is respected for his honesty, his integrity, his kindness, his love of family. And for that, he is more than a most valuable player.

So last night, I decided if I couldn’t get my father’s jersey in the rafters at Koch, I could at least get his name in lights. 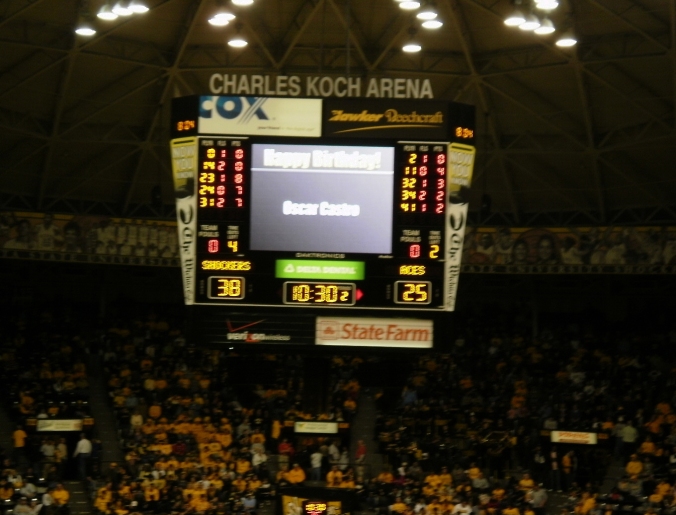 Even if for a brief moment. He was surprised. He said it made his day, that and the Shockers won their conference opener 91-57 (first conference opener win of Marshall’s WSU career). It was a good birthday. And when he asked for copies of the pictures, I knew they would find a place  in those few remaining pages of his scrapbook. A continuation of his success in life. And I couldn’t be more honored.