It seems Brad’s business is delegating our Kansas road trips, but that’s okay with me. A day of sightseeing, tasting local fare, spending the day together, plus a new contract for Concrete Colorscapes is definitely a day well spent.

Today’s adventure is Newton, Kansas. Now, I’ve been to Newton plenty of times through the years, but when I stopped and thought about all of my visits, I realized they’ve been isolated to one area of Newton. My dad has two sisters who live in Newton, so much of my time as a child was spent on Second and Glendale with the Garcia families: my two aunts who married two brothers and their combined 13 children. Today, the family has grown so large we’ve lost track of how many second and third cousins, but the majority are still living in Newton. These days I only see them at weddings, milestone birthdays or anniversaries or sadly, funerals.

So, today I want to experience the Newton I’ve never known outside the Garcia neighborhood and the Amtrak train station, where I’ve taken many a train at 3:00 am to Kansas City or Chicago. I’d asked a KMUW co-worker for some advice on places to eat, Zack having been a resident of Newton for some time, so I felt confident our visit would be positive. How it could it not be?

As with our Ellsworth visit, I’m typing my opening paragraphs while waiting in the driveway of a two-story house in a remote area of Newton. Their yard is home to multiple birdfeeders, a few water fountains and what looks like a nude torso of a man or woman leaning against the trunk of a (tree). It is so weatherworn there is no determining the sex of the statue, but its headless presence seems strange adjacent to the ten newly planted trees. The ten trees do not include the six older trees guarding the perimeter of the side/back yard or the eight in the front yard towering over the five, I’m guessing, 2-3 year old trees. One day this home will be hidden from the dirt road during the spring and summer months, protected by generations of trees whose leaves will fill the yard with their yellow-brown burden in the fall and stand at stick figure-like attention in the winter. I wonder if quite a few trees were lost at one time during a severe Kansas storm, and it’s then I notice the three large mounds of mulch, the gold-gray piles of dead leaves and broken branches, a tree cemetery of sorts, and I understand the need to fill the yard with the hopes of towering sycamores and maples.

Time to head to town. Mike Wood, the executive director of the Media Resources Center at WSU, has loaned me a book, 8 Wonders of Kansas! Guidebook, written by Marci Penner and the Kansas Sampler Foundation. I told him of our Kansas resolution so he brought me the 272-page guide with its “216 Great Places to Explore in Kansas.” I want to see the Blue Sky Sculpture located at Centennial Park. Dedicated in 2001, it is the joint effort of Phil Epp, painter and designer; Terry Corbett, ceramist and designer; and Conrad Snider, ceramist and designer. It is one of the Top 8 Wonders of Kansas. 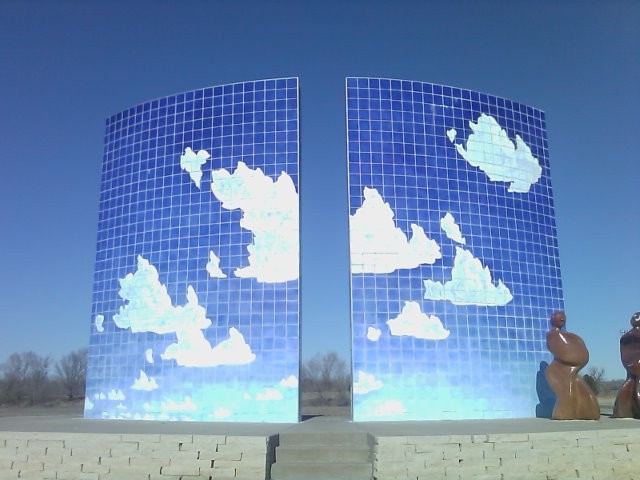 The sculpture looks amazing against the clear blue sky and while I wanted to sit and enjoy it from the blue viewing benches, the Kansas wind thought otherwise, obviously. 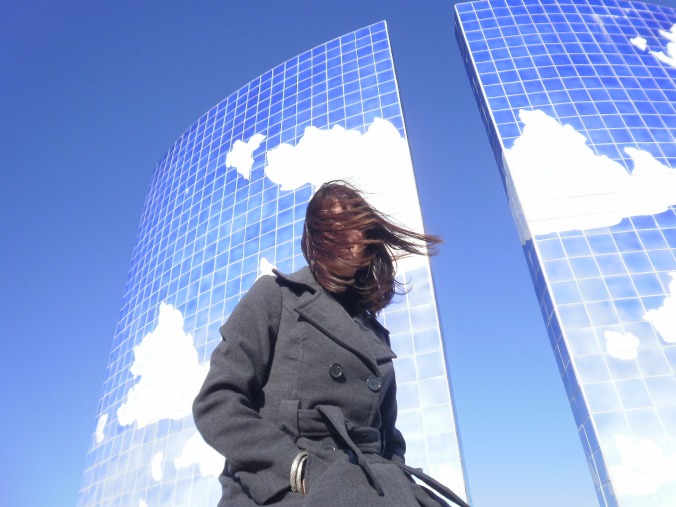 I decide I enjoy the sculpture much better from a distance, which I’m assuming was the intent. We drive through Centennial Park with its clean and groomed baseball fields, gazebos and children’s playground. Brad gets excited when he notices a freshly poured tee box for a disc golf park. Add this one to his list.

Our next stop was Main Street, where we perused the aisles of Prairie Harvest. We lost ourselves among the teas, spices, healthy snacks and Kansas products. We’d planned to eat lunch, but they’d had quite a crowd during the lunch hour and were out of many of their items that are made fresh daily. We decided to purchase some sesame seed sticks and yogurt-dipped almonds. Yummy. Within the same building that houses Prairie Harvest are other interesting boutiques: Main Street Company, Kitchen Corner, plus a small bookstore/coffee counter and an incoming tea shop. Along Main Street were other unique stores, such as Ten Thousand Villages where we sampled coffee from Africa and I tried on a few leather bracelets. At the recommendation of their staff, we decided to eat at Karen’s Kitchen. An eclectic place with an old red barbershop couch in the sitting area, shelves full of nostalgic toys, candy and memorabilia, and a deli counter where we ordered the veggie-beef soup, chili, a bierock, and a turkey sandwich. The meal was average, but we admired the old tin ceiling, the plastic-covered green tables each adorned with a quirky set of salt and pepper shakers, and the fact that Karen herself was wiping down tables and talking to customers. 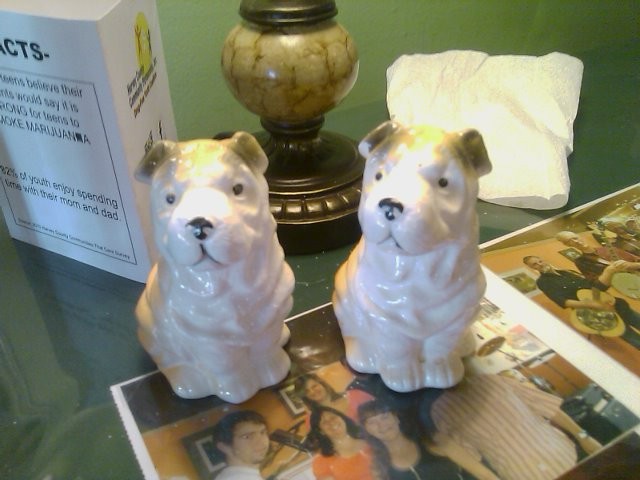 Our bellies lightly filled, we decided to hit the many antique stores lining Main Street, beginning with Wharf Road Antiques. If you love antiques, the history behind the pieces and have hours to spend, I highly recommend Wharf Road. The tiny woman who led us through the tightly packed former hotel truly loved her job of collecting, restoring and sharing the stories of her antiques. She was amazing and so were the items. Brad immediately fell in love with an old mission-style chair and we discovered two light fixtures that would be perfect with our remodel. But, the highlight was an old parlor cabinet. It was made of walnut, taller than Brad, and had to weigh a ton! Hidden within the monstrous cabinet was a hideaway bed for guests. The closest piece I’ve been able to find online is the Higgins Parlor Cabinet built in 1870, and while it does not look exactly like the item at Wharf Road, it is very similar. In case you are wondering, the asking price was $5,500. There were three stories to the antique store, and each was floor to ceiling and wall-to-wall with the most interesting furniture I have ever seen: Victorian coffee tables, a huge exterior sconce, a player piano and an old wooden child’s swing. It was difficult to leave, but we promised to return, more than likely for the bright colored, petal-shaped light fixtures.

Next door to Wharf Road Antiques is Road Runner Sales, a shop filled with garden/lawn art made from cast iron, as well as a few scattered antiques. I was captured by the mermaids, the four-inch tall green figurines, the one-foot long detailed white sirens to the four-foot tall bronze water goddess lounging in a handmade iron chair. The statures were heavy, their scales rough, their features strong, and they were amazing. Did I mention my birthday is fast approaching?  The other lawn ornaments were brightly colored and we could imagine a few of them placed about our back yard and near the lower patio, especially the tall birdhouse with sunflowers. Two stores we will definitely return.

Since we were in the antique mood, we decided to browse most of the shops on Main Street, including Metcalf Sisters and Layman’s Antique Mall and Flea Market. Oddly, the only item I purchased was a Santa figurine, Babbo Natale –  Italy’s Santa,  to add to my international collection. For two hours we squeezed through the crowded aisles of old furniture and dishware, maneuvering between the toys and clothing. Brad even clocked his forehead on a low-hanging beam, probably in search of one of the many monkey lamps he kept finding and wanting to purchase (no, no monkey lamps came home with us).  We worked up quite a thirst so we decided to check out the Iron Horse Pub for a cold beer and a snack, just a few doors down. 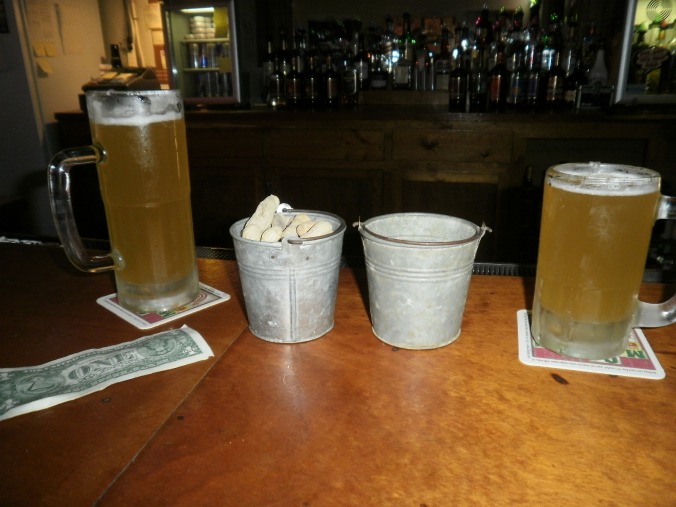 The only ones in the bar, we struck up a conversation with our bartender who was formerly from Wichita and the owner. She and her husband bought the bar five years ago, and while she enjoys running the place, she says she is still adjusting to Newton life. The bar was clean, with a decent selection of beers, plus a small menu of traditional bar food. A few regulars began to arrive, some sitting at the bar, two playing pool and slipping money into the satellite jukebox. We finished our beers, draining the last cold drops listening to Black Sabbath and David Allen Coe. I snapped a photo of the odd animal mascot on the wall, which even the owner was unsure if it was a wild boar, maybe a werewolf… 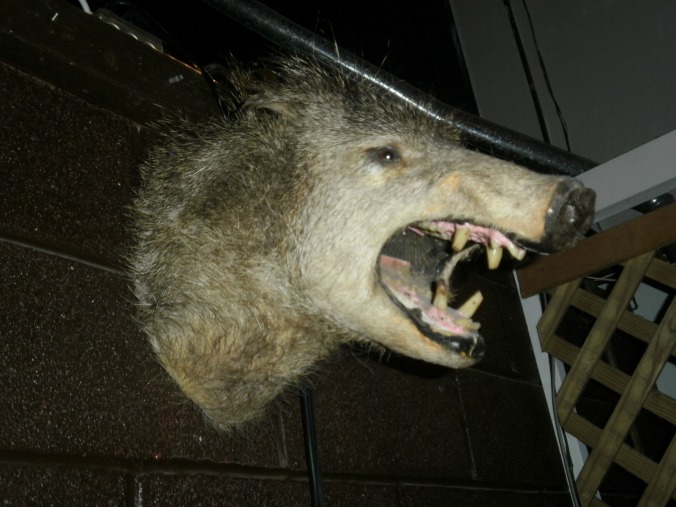 The sun was setting and the evening air was chilly as we left the bar. It had been a full day and we were ready to go home and rest a bit before watching the Shockers on television, then attending at 50th birthday party for a friend of Brads. What I realized on the drive home is no matter how we try to plan the day, plot each hour, there is never enough time to see everything in the chosen town. While we got to take pictures of Warkentin House, we didn’t make it to the campus of Bethel College or stop and say hello to the aunts. Unless we plan to stay a weekend, even a small town like Newton, with its 11.73 square miles of city, leaves us wanting more. Until we meet again…